“The political women are the great nightmare of Ortega.”
– Mildred Largaespada, Nicaraguan journalist.

Recently Nicaragua’s repressive Ortega-Murillo regime imprisoned many feminists and women leaders who have been protesting the violence of the Nicaraguan government. This Confidencial article covers the subsequent beating of 17 of these women by a large group of hooded men who entered La Esperanza {“the Hope”] prison on the night of October 26. (Some Mexican coverage on this here) The government would not allow staff from MESENI to investigate the condition of the women, and it expelled human rights monitors from CEJIL from the country on the very same day.

The mother of one of the jailed women (Amaya Coppens, whose father is Belgian) speaks out about this in this video.

Rough translation of the audio:
The women are being beaten. It seems to me, as my colleague said here, it is really an act of cowardice. No woman has ever been beaten in my house. So it seems to me that it is totally intolerable that the most basic rights of women are being violated.

I hope that this situation really helps us to question if we want to go on living with our young women being hit. I think we have to think that we have a job ahead with our families and our children. But also here I make a call to the rulers of this country who have set a bad example recently.

I would ask [Vice President] Mrs. Rosario Murillo to to ask who has destroyed her life. It is time to put a stop to this. In other words, we cannot let men mistreat and destroy the future and the lives of our women or our girls.

The arrest of the defiant Amaya Coppens.

Marlén Chow with her subversive tube of lipstick.

[There are more video clips about the beatings on the Facebook page of former Sandinista commander Dora María Tellez.]

Environmental lawyer and human rights defender, Mónica López, received death threats in August, as did members of her family. Many other Nica women have been killed, abused, detained and persecuted since April.

What can Canadians do?

Many individuals have written letters or made calls to Chrystia Freeland,
Canada’s Minister of Foreign Affairs. A range of Canadian activists signed this declaration I organized at the end of April, and a few hundred international figures, mostly from the Spanish-speaking world, signed this one. (For some inexplicable reason, the signatories all disappeared within a month or so on its original site, i.e. it may have been hacked).

Our federal government has taken some constructive diplomatic measures since the spring, and the Canadian Federation of Students has spoken out about the killings of Nicaraguan students (see this post).

Sadly, a significant bloc in the current Canadian <solidarity> movement remains mired in a 1980s Cold War mindset which mistakenly casts protestors as US or CIA puppets intent on a coup, and the Sandinista government as the valiant socialist victims of a capitalist conspiracy against them. They perceive events in Nicaragua and elsewhere in the world (Ukraine, Syria, Iran) through the dogmatic lens of <regime change>. Their silence betrays the values of solidarity, democracy and human rights. In the case of the beatings of female political prisoners, this silence ignores extreme sexist violence.

Common Frontiers is “a multi-sectoral working group which confronts, and proposes an alternative to, the social, environmental and economic effects of economic integration in the Americas.” This sounds like a coalition in favour of universal human rights and democracy, right?

No, their solidarity seems to depend on political affinities. In spite of the high level of state repression in Nicaragua since April (well documented by Amnesty International* [“Shoot to Kill: Nicaragua’s Strategy to Repress Protest” in English here; reportaje en español aquí, about students here and more recently here en español aquí]  and other human rights organizations), Common Frontiers has not made one single public statement denouncing extrajudicial killings, arbitrary detention, torture, disappearance, the loss of freedom of assembly, or media censorship on the part of the Ortega-Murillo regime.

Why have they not protested the Ortega-Murillo regime’s inter-oceanic canal project that poses threats to the environment as well as to peasant, indigenous and Afro-caribbean people?
[worth reading watching the video narrated by Gioconda Belli – even for non-Spanish speakers.]

Are they neo-Stalinists or <Machista-leninistas>?
[This is a better pun in Spanish than English – a jab leveled at defenders of the Ortega-Murillo regime by internationalist left wing feminists.]

The silence of Common Frontiers in the face of well-documented human rights abuses gives the impression that state-sanctioned murder, torture, disappearance and arbitrary detention may be crimes in some countries, but not in Nicaragua. However, it’s likely that few of their member groups have an accurate picture of the actual situation in Nicaragua, and that a small number of gate keepers at Common Frontiers have been spinning their own version of events that echo the Ortega-Murillo regime’s propaganda.

The fluency (or lack of fluency) in Spanish of the representatives of various unions and organizations who make up Common Frontiers may be another factor in their awareness (or lack) of critical analysis of Nicaragua in the international Spanish press. This in turn may lead to tacit support of Common Frontiers’ position – or avoidance of a position – on Nicaragua.

Even though state forces, paramilitaries and armed pro-government gangs have killed over 500 people since April, 2018, news about Nicaragua is almost entirely absent on the Common Frontiers Facebook page. The one article about Nicaragua that they posted on September 29 is selective, poorly researched and offers a feeble defense of the Ortega-Murillo regime. The author attempts to discredit Amnesty International’s spring report on Nicaragua, but offers no substantial evidence, apart from a link to an Orteguista critique posted by pseudo-journalist and conspiracy theorist, Max Blumenthal.

NACLA has published many other articles about Nicaragua over the years which Common Frontiers has not shared since April when state repression skyrocketed, for example:

Strange Bedfellows: The Aleman-Ortega Pact (September 25, 2007) by Alejandro Bendana
Nicaragua: A View from the Left (July 25, 2018) by Jeffrey L. Gould

In Nicaragua, the Latest Zombie Megaproject – The Interoceanic Grand Canal is a threat to the environment and to the Nicaraguan people (May 20, 2016) by Jennifer Goett

[Canadian Lori Hanson has spent 35 years building solidarity connections in Nicaragua and wrote this piece in late August about the impact of repression on health care: Side Effects: Persecution of Health Workers in Nicaragua .]

Those who persist in describing the Ortega-Murillo regime as socialist and progressive have not been paying attention to their actual fiscal policies. The Committee for the Abolition of Illegitimate Debt critiques them here [en español aquí] as has Envío which has been publishing solid research and analysis from the University of Central America in Managua for decades. Here’s a recent example of their perspective:
“A cornered regime is shooting at a mounting civic revolution.”

In fact, hundreds of articles about Nicaragua have been published in Spanish, English and other languages since April. Many of them denounce state violence in Nicaragua and the refusal of certain left wing sectors to call for an end to the human rights abuses of the Ortega-Murillo regime. Here is an unsorted sampling from my bookmarks folder.

Common Frontiers uncritically posts links to material from the US-based Alliance for Global Justice (AGJ), which openly supports the Sandinista regime and believes in the US conspiracy theory, regime change and an attempted coup instead of recognizing a legitimate, diverse, grassroots quest by hundreds of thousands of Nicaraguans for their basic human rights.

If you belong to one of these Common Frontier member groups, and if you support universal human rights, please ask your organization to make its own independent assessment of the situation in Nicaragua, and to call upon Common Frontiers to speak out about the violence of the Ortega-Murillo regime.

Oxfam Canada has projects in Nicaragua and their mission is to build lasting solutions to poverty and injustice with a focus on improving the lives and promoting the rights of women and girls. We can ask Oxfam to protest the abuse of imprisoned women and girls. Contact them via

CoDevelopment Canada supports projects in Nicaragua, including Movimiento Elena Cuadra whose leader Sandra Ramos has been critical of the Nicaraguan government. CoDev finally made this statement after eight months of repression, which is a positive step, but they not taken taken steps to mobilize their base. We can ask them to do so, and to protest the mistreatment of political prisoners and the violations of human rights. Contact them via

Or if you are a member of CoDEV’s Canadian partners and supporters among these unions and organizations, please contact them.

I encourage friends to follow the FB page of Iniciativa Nicaragüense de Defensoras DDHH de las Mujeres (Nicaraguan Initiative for the Defense of Women). You don’t need to speak or read Spanish to understand many of their posts or memes. A Mexican interview with one of their members is here. An excellent summary of the role of Nica feminists in the resistance to the Ortega-Murillo regime is here.

Here is a small gallery of photos, memes and graphics from the ongoing efforts of Nicaraguan women to free themselves and their country from violence and repression.

Freedom for the detained.

A mother prays at the El Chipote jail gate.

Solidarity with the CEJIL human rights organization expelled from Nicaragua.

What’s happening in Nicaragua? “Not forgotten; not forgiven.”

Nicaraguan feminist statement about the beating of female political prisoners.

They were taken alive; we want them alive.

Betrayal of the Revolution poster.

Central America, you will flower; creating feminst ties with Nicaragua.

Art in times of crisis; a panel sponsored by PEN. 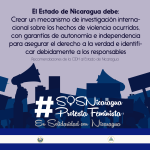 “One can’t make a revolution without the participation of women.”

“One can’t make a revolution without the participation of women.”

Stencil: lesbians with home made mortars.

These women deserve moral, diplomatic, economic and political support from Canadians, especially from organizations and individuals that espouse solidarity with Latin America.

*Full disclosure: I was the Central America Special Action Coordinator for Amnesty International’s anglophone groups in Canada from 1979-81.